‘Henry Kissinger is responsible for the deaths of millions. He’s a murderer, a liar, a crook, and a thug, and should be tried at the Hague.’
by Jon Queally, staff writer 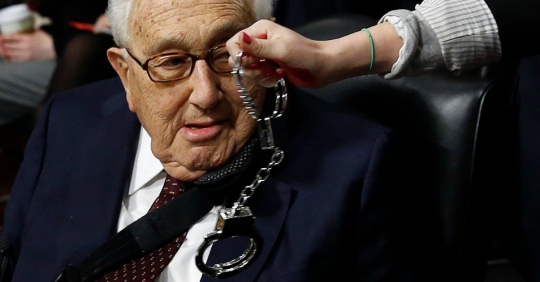 A CODEPINK demonstrator dangles a set of handcuffs in front of former United States Secretary of State Henry Kissinger at the Armed Services Committee on global challenges and U.S. national security strategy on Capitol Hill in Washington January 29, 2015. The group wanted Kissinger “arrested” for his role during the Vietnam conflict as Secretary of State for then-President Richard Nixon. (Photo: Reuters/Gary Cameron)

While defending Henry Kissinger during a dramatic protest during a Senate hearing on Thursday, Sen. John McCain (R-Ariz.) called those speaking out against the former Secretary of State as “low-life scum” as they were escorted from the hearing room by Capitol Police.

Kissinger served under President Nixon and is widely reviled by human rights advocates for his involvement in orchestrating the Vietnam War and defending U.S. foreign policy, including various atrocities, across the planet for more than half a century.

Members of the peace group CODEPINK took the opportunity of Kissinger’s testimony before the Senate Arms Service Committee to confront the man they call a “war criminal” as they attempted to serve him with a ‘Citizen’s Arrest Warrant.’ Holding a banner and dangling handcuffs in front of a stoic Kissinger, the protesters declared him a “war criminal” who should be arrested and prosecuted for numerous offenses. 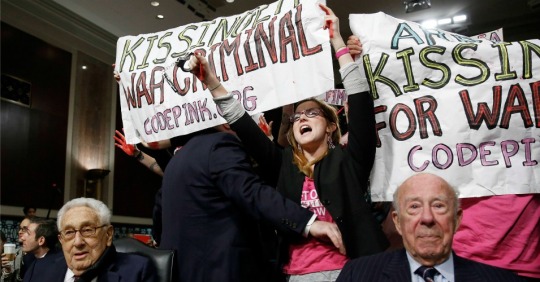 “CODEPINK is really proud of our action in the Senate today, speaking out on behalf of the people of Indochina, China, East Timor and peace-loving people everywhere,” said CODEPINK co-founder Medea Benjamin. “Henry Kissinger is responsible for the deaths of millions. He’s a murderer, a liar, a crook, and a thug, and should be tried at the Hague.”

“We need to stop rehashing these tired old war criminals and come up with a new foreign policy based on diplomacy and compassion—two things Kissinger knows nothing about.” —Alli McCracken, CODEPINKAs

McCain, the chairman of the committee, at first asked, “Could someone find out where the Capitol Police is?”

Kissinger sat calmly in his witness chair, as protesters and photographers gathered around. […]

As the protesters were led out by police, McCain said, “I’ve been a member of this committee for many years, and I’ve never seen anything as disgraceful and outrageous and despicable as the last demonstration.”

Finally, McCain said, “Get out of here, you low-life scum.”

McCain’s incredulous response did nothing to dissuade the peace activists from their position that Kissinger is a criminal who belongs in prison, not an elder dignitary deserving of praise. In addition to Kissinger, CODEPINK’s national coordinator Allie McCracken singled out former Secretary of State Madeline Albright, also testifying before the committee, for her role in past crimes of U.S. foreign policy.

“Kissinger’s true legacy is that of destruction. He is the great American villain.” —Anna Kaminski, CODEPINK

“I chose to speak out during the Senate Arms Committee because I’m appalled that the Senate would bring in a war criminal to testify about ‘American leadership’ when the only things Henry Kissinger and Madeline Albright have shown leadership in is wreaking destruction upon other countries and murdering countless innocent civilians,” said McCracken. “Is that the leadership we want to uphold as a nation and use to determine our current and future foreign policies? We need to stop rehashing these tired old war criminals and come up with a new foreign policy based on diplomacy and compassion—two things Kissinger knows nothing about.”

Anna Kaminski, a CODEPINK organizer who also participated in the protest, said, “Kissinger is one of many representatives of the culture of impunity which still dominates American leaders’ approach to foreign policy. While he has been continually criticized by activists for his orchestration of or support for egregious crimes, he is regarded as a bulwark for global diplomacy by those who walk the hallowed halls of congress. His true legacy is that of destruction. He is the great American villain, Kissinger’s agent orange in Vietnam is Bush’s Depleted Uranium in Iraq, the time to end impunity is now.”

The official ‘Citizen’s Arrest Warrant’ drawn up by CODEPINK read as follows:

CODEPINK calls for the arrest of Henry Kissinger for War Crimes

Vietnam: From 1969 through 1973, Kissinger, working for Richard Nixon, oversaw the slaughter in Vietnam, Cambodia and Laos, which led to the deaths of millions of people. Many thousands more died from the affects of massive doses of Agent Orange and from unexploded US bombs that cover the countryside.

Chile: Henry Kissinger was one of the principle architects of the coup in Chile on September 11, 1973, a coup that overthrew the democratically elected government of Salvador Allende. Sixteen years of repression, torture and death followed under the rule of Kissinger’s friend, the fascist Augusto Pinochet.

East Timor: In 1975, while working for President Gerald Ford, Kissinger pre-approved the Indonesian dictator Suharto’s bloody invasion of the small island of East Timor. This illegal act of aggression was carried out with weapons furnished by the US. By the time the Indonesian occupation finally ended in 1999, 200,000 Timorese – 30 percent of the population – had been wiped out.

This is Kissinger’s legacy. Death. Destruction. Suffering. Misery. Dictatorships. His is a murderer, a liar, a crook, a thug.

Democracies should hold their officials accountable for their acts. That’s why we demand that Kissinger be arrested for crimes against humanity and tried at the Hague.